skip to main | skip to sidebar

Welcome to my blog

On this blog you will find two types of entries. First, of course, normal bolg pots, and second, you will find articles. You can distinguish articles because they will have the label "article". The special thing about articles (contrary to my normal blog posts) is that they are longer, more thoughtful, and I will keep them updated to my current ideas and thoughts. So, because articles never get outdated, I will always encourage you to comment on them, no matter how old they are.

I hope you will enjoy my blog. 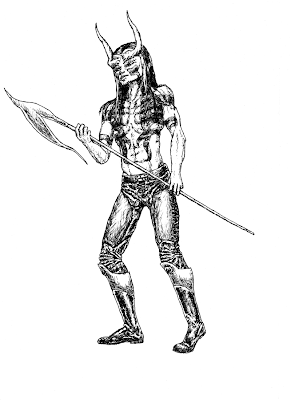 I am working on a game called The Old Race, where you play a race called Gammirs, so I am beginning to make some concept drawing of these creatures, to get an idea of what they should look like.

Here is a drawing of a young Gammir. I now regret that I depicted this Gammir with a weapon (or something which look like a weapon), because, even though Gammir can be fearsome warriors, they normally despise violence, and war is not something which normally occurs in their culture. You should just imagine that he is engaged in some kind of fighting sport.